info@pennyblackadvisers.com
Give us a Call Now!
Menu

How Much is a Penny Black Stamp

This Penny Black was knows as the “finest and most attractive Penny Black cover in existence” and was part of the “Chartwell Collection”. The Chartwell collection held over 80 stamp albums and fetched over £20,000,000 in auction. You can see the Penny Black stamp in the picture above on the envelope.

The cover bears a rare corner marginal plate stamp bearing the part inscription “…ove the cement” at the bottom of its very large foot and right margins.

The stamp has been neatly tied on its centre with a complete pale reddish-orange Maltese Cross cancellation stamp. It is very difficult to see these and the Penny Black’s black ink would eventually lead to the penny black stamp’s eventual extinction to be replaced by the Penny Red in the following year, 1841.

It is the condition which set this magnificent Penny Black apart. It was posted from Wakefield, UK, on May 13th, 1840, to Mr. William Bywater in Pontefract and it was found lying in a metal box.

The collection was made up of both fine rare stamps and proofs so extensive, covering entire reigns at times, that it is hard to believe it was all put together by just one dedicated collector, Sir Cyril Humphrey Cripps. He was an avid philatelist. You can read more about his history here.

The first ever adhesive postage stamp was invented and printed in Great Britain in the Victorian era. The Penny Black is the world’s first ever stamp used in the postal system.

The History of the Penny Black

The Penny Black was the world’s first adhesive postage stamp used in a public postal system. It was issued in Great Britain on the 1st of May 1840, for official use from 6 May of that year. The stamp features a profile of Queen Victoria on one side.

Who invented the Penny Black stamp?

Whilst Wikipedia gives the title to Rowland Hill, it is thought the original concept of an adhesive stamp was thought up by a Scotsman.

James Chalmers, a bookseller and printer from Dundee, suggested a solution of pre-paid postage stamps in 1822, but it took another 15 years for MP Robert Wallace to imagine an envelope, of a standard size, which would carry the stamp.

Two years later, the Penny Postage Bill was passed in Parliament and treasurer Roland Hill announced a competition to find a designer for British envelops and stamps, of which 2,600 entries were submitted.

Hill chose the envelope and stamp designed by artist William Mulready (see below). 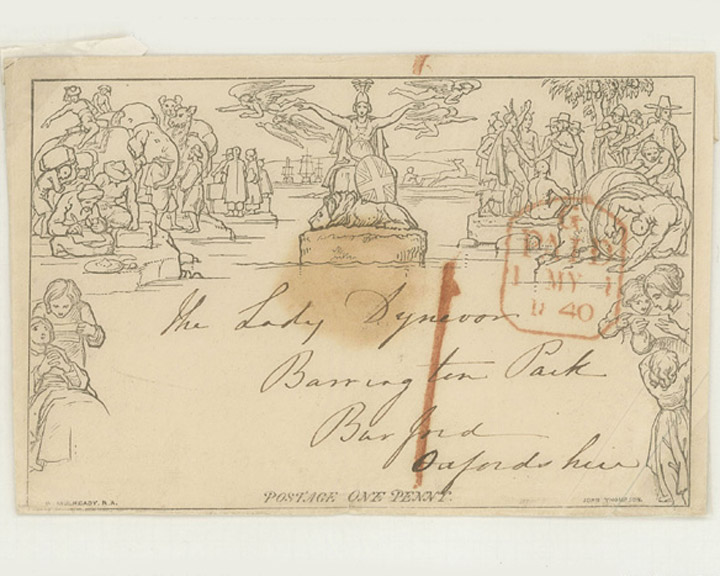 Mulready’s stamped lettersheet was perhaps a better idea than how it appeared in reality. The sheet had an elaborate “poetic” design inspired by the British empire, with a figure of Britannia and an apathetic lion in the middle. It was roundly mocked and inspired so many caricatures that in the end, it was withdrawn.

Sir Rowland Hill, was an English teacher, inventor and postal reformer, born in 1875 in Kidderminster and taught in Birmingham. Rowland revolutionised the way post was delivered in the 1800’s allowing the safe, fast and cheap postal service which still exists to this day. Before Rowland came along, most post was paid for by the receiver and the system meant price was based on weight of packages and distance. Postage was in effect, the realm of the wealthy.

Before Hill, many letters had to be franked by dignataries and MP’s making delivery slow and expensive. There was also mass fraud as people could refuse to pay on delivery, whilst they could design coded messages written on an envelope whilst avoiding paying for delivery.

The World’s Most Expensive Stamp – The Penny Black Stamp

For years, the world’s most expensive stamp was the Penny Black stamp. Then the British Penny Red took over.

The most expensive stamp Stanley Gibbons sold in 2011 was a British Penny Red, for £495,000. I was in really poor condition, but there are only nine British Penny Red’s in the world. The Post Office decided the printing plate was not up to scratch, so they destroyed it. But one sheet got into circulation. 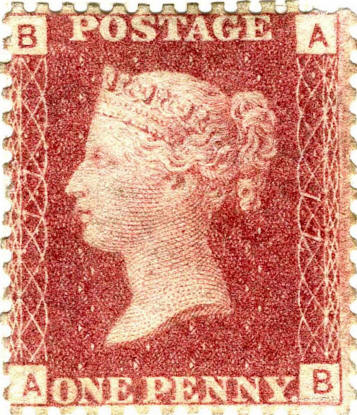 The US’s Second Most Valuable Stamp – The Penny Red Stamp

This became the UK’s second most valuable stamp. The Plate 77 Penny Red, one of five used examples known to philatelists was purchased by an unnamed British collector.

The world’s most expensive stamp is the British Guiana One-Cent Magenta postage stamp from 1856, which is the only one of its kind to still exist and sold for a record of $9.5 million at Sotheby’s on Tuesday, 2nd June, 2014.

The hefty price, which includes the buyer’s premium, makes the one-inch by one-and-a-quarter-inch stamp (2.5 cm by 3.2 cm) printed in black on magenta paper the world’s most expensive stamp ever sold at auction, and the most valuable object in the world by weight and size, according to the auction house.

The previous record auction price for a single stamp was 2.87 million Swiss francs (about $2.2 million). It was set in 1996 for the Treskilling Yellow, a Swedish stamp that is a misprint of an 1855 shilling stamp in the wrong color.

An earlier Penny Black, ‘earliest registration’ stamp was also sold for 216,000 GBP in the Chartwell sale in 2011. The Plate One imprimatur and its $287,609 Plate Two sibling each exceeded estimates of what they would receive at auction through Spink.

It’s impressive enough that the 1840 One Penny Black was the world’s first postage stamp, but its recent record on the auction block also speaks volumes.

Until recently, the World Record price for a singled mint penny black which was valued at $156,000 at a Danish auction house in 2004. This was later surpassed in 2009, when British stamp dealers Stanley Gibbons sold a single penny black stamp for $250,000.

Yet the Chatwell collection of Penny Black stamps that were on sale at Spink weren’t just “mint” condition, but are from the Penny Black’s first-ever registration sheets; the final imprimatur version of the stamp before it went to print.

The first, from Sheet One, Plate One, is an important and unique position piece boasting extremely large margins.

To give you an idea of how coveted this stamp is, one of its siblings which was removed from the same sheet, stamp “AL”, can be found in the Royal Collection. Another marginal example, “TL”, is in the Postal Museum.

In other words, this one, “TA”, is an historic philatelic piece of the utmost importance. Rightly billed as a “stunning stamp of exhibition quality”, it appeared in today’s Spink sale with a pre-sale estimate of 120,000-150,000.

And that’s not all. Auctioning straight after it was another “TA” stamp from the second registration plate, Sheet One, Plate Two, registered later than Plate One on April 22, 1840.

Penny Black Stamps can currently be bought on sale at ebay for anything from 40 GBp to 96,000 GBP. But, would you trust buying something this valuable on ebay? How would you prove its authenticity? There is a better and more trusted ways to buy a Penny Black through Stanley Gibbons.

Please contact us to find more about investing in rare stamps.